“The Florida mansion where convicted pedophile Jeffrey Epstein sexually abused underage girls is set to be demolished by a real estate developer.

The local developer, Todd Michael Glaser, confirmed to the Wall Street Journal for a Monday article that he signed a contract with Epstein’s estate to buy the deceased financier’s Palm Beach property. The property went on the market in July for $21.995 million.”

During the lull we are looking at the FBI Vault documents cache – and see  Belohlavek in page 22 of the file.

This name Belohlavek comes up in the early deposition pages.
What a slimeball!

“Krischer’s office then undermined its own witness, who had told police she had been fondled by a naked Epstein while she gave him a “massage,” sources close to the grand jury proceedings told The Post.

Prosecutor Lanna Belohlavek peppered the girl with questions about her social media pages, the sources said. The girl’s MySpace account, supplied to prosecutors by Epstein’s lawyers, portrayed her drinking liquor with boys and talking about sex.

Unmoved by her testimony, the grand jury came up with one charge of solicitation of prostitution – what a “john” would face.

How the grand jury came to that conclusion has led The Post to file suit to get the transcript of the secret proceedings. In its action filed last week, The Post argued that in the interest of justice, the public should see how vigorously Krischer’s team pursued its case.”

From the same file:

We would like to see the missing 2 pages or so of transcript not included in this PDF (from page 2-3). They must be dynamite.

We were looking at page 1 of this FBI document file – 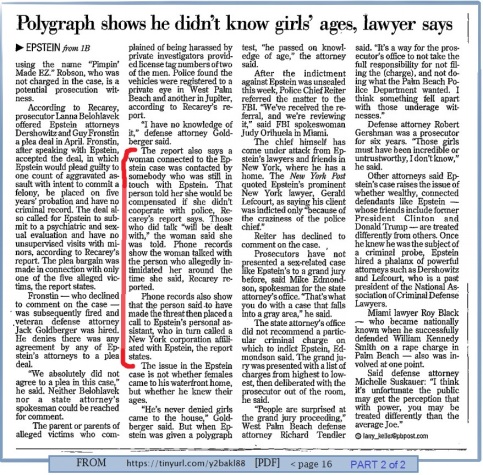 “Ghislaine Maxwell – a longtime associate of Jeffrey Epstein – is fighting to keep sealed court documents about her sex life under wraps, according to a new filing.

The secret documents relate to a seven-hour, 418-page deposition Maxwell gave as part of a now-settled defamation lawsuit filed against her in 2015 by Epstein victim Virginia Roberts Giuffre.”

” . . . before the woman, who was 19 when questioned by federal agents in 2008, was able to testify, Epstein had secured a controversial non-prosecution agreement with the US Attorney’s Office in Miami by pleading guilty to two state prostitution charges. The alleged victim’s testimony was abruptly cancelled, while Epstein was sentenced to 18 months in a county jail.”

“A woman whose allegations of childhood sex abuse in New York were central to last year’s indictment of Jeffrey Epstein was questioned by the FBI and subpoenaed for testimony by federal prosecutors in Florida more than a decade ago in connection with the first federal investigation into Epstein’s alleged child sex trafficking, according to court documents and multiple sources familiar with the events.
But the woman, who was 19 at the time of her initial contact with federal agents in 2008, did not appear before a grand jury in West Palm Beach, as the subpoena commanded. Before her testimony could be secured, Epstein cemented a controversial and once-secret non-prosecution agreement. . . . “
[…and she was 14 when Epstein got a hold of her]

I recorded a short episode talking about the recent release of documents on the 2006-2008 prosecution of Jeffrey Epstein. I discussed why State Attorney Dave Aronberg decided to make these files publicly available. Later I touched on a few strange tidbits I found, including a story about Epstein employing Wackenhut security guards and a “ninja” who was hiding out in Epstein’s bushes. The ninja turns out to be a private investigator linked to corrupt attorney Scott Rothstein and the Gambino Family, thus adding another strange layer to this complex story.

While you’re looking at Dershowitz…
Why was Palm Beach resident & former FBI Director Louis Freeh running interference for Dershowitz in 2016? Where is the “evidence” that Freeh reviewed? What was the price tag on this get out of jail card?https://t.co/BnuZ7HRFDp

“Officials at the Palm Beach County Jail were told to keep Epstein and the unidentified woman — who was being held in a drug intervention dorm — “separate” from each other, the Daily Mail reported.

They were also told to keep the dilemma under wraps.

“The fact that they are both here should not be ‘advertised,’” Lt. Mark Chamberlain advised his lieutenants in a Dec. 17, 2008 email obtained by the outlet. “Please ensure they are kept separate at all times, with emphasis on medical, visitation and GED classes.”” . . . (more)

There will probably be more on this as-bad-as-MCC-jail in the future. New items will get put in comments here – FC

It also included billionaire hedge fund manager Glenn Dubin and his wife, Dr. Eva Andersson-Dubin – a former Miss Sweden who dated Epstein for three years before she and Dubin married in 1994.

The Dubins and Epstein were close, and remained close after his 2008 conviction for pedophilia – inviting him to their Palm Beach home for Thanksgiving the following year. Eva even wrote an email to Epstein’s probation officer insisting that she was “100% comfortable” with the pedophile and registered sex-offender being around her minor children. . . . “ (more)