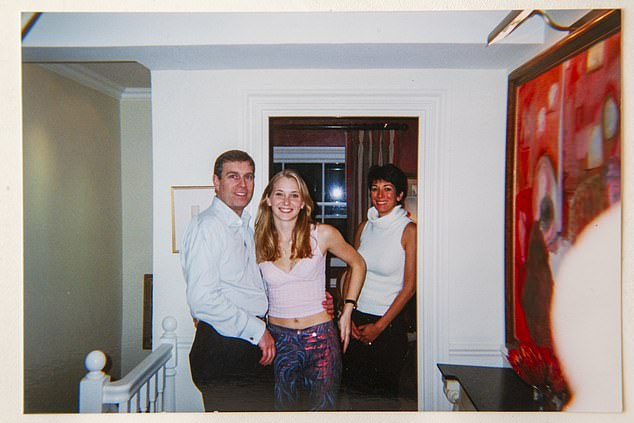 ” . . . Tom Pritzker, 72, the governor’s cousin and the CEO of The Pritzker Organization, recently made headlines when he tried unsuccessfully to prevent the publishing of court documents relating to the late pedophile Jeffrey Epstein. Tom was first named in documents unsealed in New York in 2019 as one of a number of prominent men — including former New Mexico Gov. Bill Richardson — whom Epstein accuser Virginia Giuffre said she was directed to have sex with, the Miami Herald reported at the time. (Pritzker and the others all denied the allegations.) “

U.S. Virgin Islands sues JPMorgan Chase – accusing the bank of helping Jeffrey Epstein sex-traffic minors at his villa by ‘knowingly providing and pulling the levers through which recruiters and victims were paid’

” . . . George is now unemployed, after Governor Albert A. Bryan Jr. fired her for allegedly filing the suit against JPMorgan without his permission.”

Daily Mail  [UK]  –
‘The footage will haunt me for the rest of my life.’ Jeffrey Epstein survivor claims she watched tapes the pedophile made of his wealthy friends having sex with a female victim for ‘blackmail’ – and says she still has copies stashed

“And Sarah Ransome’s newly released deposition has rekindled allegations that top attorney Alan Dershowitz was involved in the abuse of underage girls.”

Panda Eyes is caused by brutal sodomy according to Illuminati survivor Cheryl Beck.

Panda eyes are not just caused by brutal sodomy, and without checking some of these may be from other physical trauma but it gives an idea.

This post is relevant to references to Panda eyes on a Balenciaga post now published Balenciaga – The Devil is in the Detail https://foxyfox.substack.com/p/balenciaga-the-devil-is-in-the-detail

Did Ghislaine pimp for her father long before she met Epstein? Robert Maxwell was an overbearing bully whose youngest daughter would do anything to please him. Now JOHN SWEENEY unravels their complex relationship — and poses this shocking question

“Her brother, Ian, says yes, adding: ‘He ruined her life.’
But the truth is that her life was ruined long before she met financier Epstein, with his sordid taste for under-age girls — a perverted craving that Ghislaine made it her job to satisfy.”

These are a collection on royal child abuse that Spidercat and I collected a few years ago and that she sorted and arranged and blogged. I have put alternative archive links for many that were dead links.

Unfortunately Spidercat stopped blogging and had her blog terminated so her links are dead. The Coleman Experience went private and so I have tried where possible to put new links to his archives.

The original blog was on the old wordpress editing system, before this new block editing system, so it was impossible to edit on the orginal post. So I have made a new post but they have not transferred seamlessly but adequately.

“The church tried to argue that its responsibility to take care of retired priests and deacons is not governed by U.S. federal law but by the church’s own rules, known as canon law. It argued that clergy would only lose their retirement benefits if they were laicized — or stripped of their ordination as priests or deacons. Aymond said he could remove priests and deacons from ministry, but he couldn’t forcibly laicize those who don’t voluntarily agree to leave the priesthood or deaconate. That could only be done by the Vatican.”
– – – – what eff????

Many people are not interested in hearing what Tommy Robinson has to say.

I will say this. I think he is genuinely concerned for the victims and survivors of child sexual abuse. He is also learning as he goes along, he recognises some of his faults and the problems of how people perceive him. He recognises that he may not even be the right person to expose this, as it should be non political. He is doing some very good work and no-one is doing what he is doing to the extent he is doing it.

My prime concern is for the survivors, the victims, the children, and Tommy Robinson is helping them.

If you have doubts about Tommy then watch Episode 3 first, with Sarah, and how he now helps her. She wanted nothing to do with Tommy previously due to his politics, but she watched…

Kirby Sommers’ channel. Her books are listed on her website.

Why didn’t Ghislaine Maxwell give out names?

Blast from the past –

What is all the fuss about pizza? Who is this heckler, Howard Caplan, also known as “Pizzagate Howie?”
For those unfamiliar with the issue, Pizzagate started with John Podesta’s leaked emails, which contained many references to pizza. Many of the references clearly have to do with food. Others are less so.
For example, this one, dated September 2, 2014, is clearly not. Someone named Susan Sandler emails John Podesta to ask:

“The realtor found a handkerchief (I think it has a map that seems pizza-related. Is it yorus? (sic) They can send it if you want. I know you’re busy, so feel free not to respond if it’s not yours or you don’t want it.”

“It’s mine, but not worth worrying about.”

President Obama is named in another email as having spent $65,000 on “pizza/dogs” which he transported from Chicago to the White House. However, the…

“Ukrainian children escaping the war are going missing, and many are in danger of being kidnapped by human smugglers as 2.5 million refugees have massed at the borders, aid groups say.”