This post will feature all the slimy news items popping up about the pedo-prince. – FC

“Scotland Yard is coming under increasing pressure to explain why it failed to carry out a full investigation into allegations that a teenager had been trafficked to the UK to have sex with the Duke of York.

Four years ago the Metropolitan Police received a complaint alleging that in 2001, 17-year-old, Virgina Roberts-Giuffre, was flown to London by paedophile Jeffrey Epstein and coerced into having sex with the Duke.”

Another assh*le pervert who got a free pass  – Hubert Chesshyre

“One of the country’s most venerable educational charities faces a backlash after it declined to sever its links with a sex abuser, a decision that has bewildered his victim.
It has emerged that, following a vote, the [pedo club] Society of Antiquaries, which describes itself as “Britain’s oldest learned society concerned with the study and understanding of the material past”, is to allow Hubert Chesshyre to remain a fellow.”

“Educational” – yeah, teach kids they will be ignored for life if they dare raise complaints about pedos!

“HOAR is now offering a 10,000 reward to anyone who can provide information which directly results in us successfully making contact with her [Ghislaine Maxwell] in person.”

Not-ready-for-prime-time bro finishes hiding out in NZ and will step into more polished shoes while pretending the monarchy is still viable.

Daily Mail [UK] –
Prince Charles ‘to take on role as Prince Regent’: Heir to the throne meets his father to discuss taking control of family affairs as Queen, 93, prepares to ‘retire’ within 18 months

Who needs these leeches?

‘Lock them all up and throw away the key’: Virginia Roberts says Ghislaine Maxwell must be arrested and Prince Andrew belongs in jail as she accuses authorities of a cover up

I’ll believe it when I see it!! Does anyone honestly believe that the truth will be spoken- ever? I say lock em’ all up & throw away the key! All we’re going to hear are lies, lies & oh- more lies!! ⛓🦋 https://t.co/0pJr27tsrZ

#1 on our sh*t-list is this haughty creature, Lady Colin Campbell…

Here’s another one – ” . . . friends of the Duchess of York told The Telegraph: ‘She [Virginia Roberts] should be properly cross examined and on all the evidence that doesn’t stack up.’She should be put on the rack.“

Maybe these “friends” should bother to look at the years-old depositions from over 100 Jane Does that were shelved with the help of slime from Buckingham Palace. The efforts to discredit the instamatic photo of the pedo prince inside Ghislaine Maxwell’s London flat has been authenticated by the Daily Mail in their new report. The clumsy efforts by the palace to discredit it are another feeble attempt to prop up the serial child rapist. All of these women (who don’t know each other) are not lying.

Why is the pedo prince not speaking up for himself, but hiding in a palace and having these hangers-on attacking his victims? A sure sign of cowardice we say. 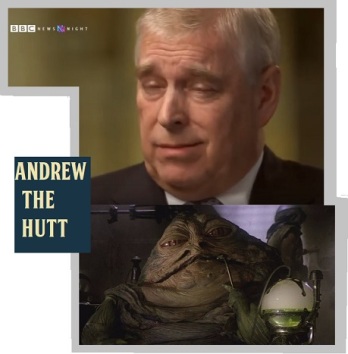 See Also – Questions we have for pedo-prince Andrew

2 items sent in. They speak for themselves.

” . . . . The Prince of Wales is in the air after his visit to New Zealand and the Solomon Islands was completely overshadowed by the Duke of York’s disastrous interview with the BBC about Jeffrey Epstein and his ‘sex slave’ Virginia Roberts.
Charles is believed to have called his mother the Queen and urged her to sack Andrew from all royal duties and roles immediately fearing his presence could fatally damage the British monarchy.”

Prince Charles slinks away to wimpy dad’s castle to ask for advice.
He plans to hideout there and avoid his criminal sibling.

MORE:
Daily Mail [UK] – Prince Charles heads straight for Sandringham to see his father and discuss how to deal with fall-out over Prince Andrew’s interview after landing back in the UK from royal tour in New Zealand

Jeffrey Epstein: Blackmailer Sex for the Mossad and CIA

” . . . Indeed, Epstein’s controllers are way above Acosta’s “pay grade,” and there is little chance the full story on this blackmail operation will ever see the light of day, and it does, like the Franklin sex scandal before it, the corporate media will turn it into a conspiracy theory on by with Pizzagate.

All stops will be pulled out to prevent the public from knowing the US and Israel blackmail our “representatives” through their Zionist scheme for “Greater Israel” and dominance in the Middle East.”

Other items on Acosta will  get linked back here if we add any.  – FC

We are NOT making this up!

–
“The Queen is also expected to order Andrew and his staff to leave their Palace offices – or face a hefty bill to rent them privately.

The friend added: “There is no longer a need for the Queen to fund Andrew’s private secretary or office from the Sovereign Grant because he no longer has a public role.”

“There will be a transition period for the staff to move out of Buckingham Palace. But Andrew has assured Amanda she will keep working for him in another role. It’s astonishingly arrogant.””

Next-in-line, Charles is way down in New Zealand attending a farmers’ market. He has been no help to his royal mum, the reptile queen.

Thank you to everyone who welcomed The Duke of Gloucester to #Rutland yesterday.

The Duke visited @RutlandShow, met local business owners at The King Centre and celebrated the 50th anniversary of @rutlandmuseum. pic.twitter.com/oFhKLPk8ST

Just in: Determined pedo-prince thumbs nose at HRM Queen of the Reptiles and will do self-serving promo in human-rights-gutter, Bahrain. Next-in-line brother idly watching mum getting defied by pedo brat.

NOTE: We had put some interesting items about this assistant to the pedo prince in comments on this post, Just in – pedo prince’s getaway plan squelched by royal family before he can get to the airport

No, Elle, that’s NOT what “we need to know”.
What we need to know is what you fashion magazines have to do with child trafficking, sponsoring child trafficking events and so-called celebs.  And we need to know about your conspiring to cover up the crimes of top model agency honchos like pedos, Les Wexner and Jean-Luc Brunel.
And let’s not forget that the line used most successfully by Epstein’s pimp (Epstein’s boss?), Ghislaine Maxwell was, “Come in this car with me, Dearie, and I’ll make you a fashion model!”.

“Chauntae [ Davies ] has demanded that Andrew speak to FBI agents as they move to nail Epstein’s associates.
Andrew insisted last week he had not noticed young girls surrounding Epstein.
But Chauntae said: “I hope he is ­honest. There is no way you could have been a friend of Jeffrey’s and not know what was going on.
“I don’t see how you could see somebody with another young girl all the time and there never being a conversation about it. It doesn’t add up.””

Prince Andrew is ALREADY plotting a comeback, but Charles wants him ‘permanently retired’: Duke intends clearing his name by speaking to the FBI as Royal sources say he is ‘naively positive’